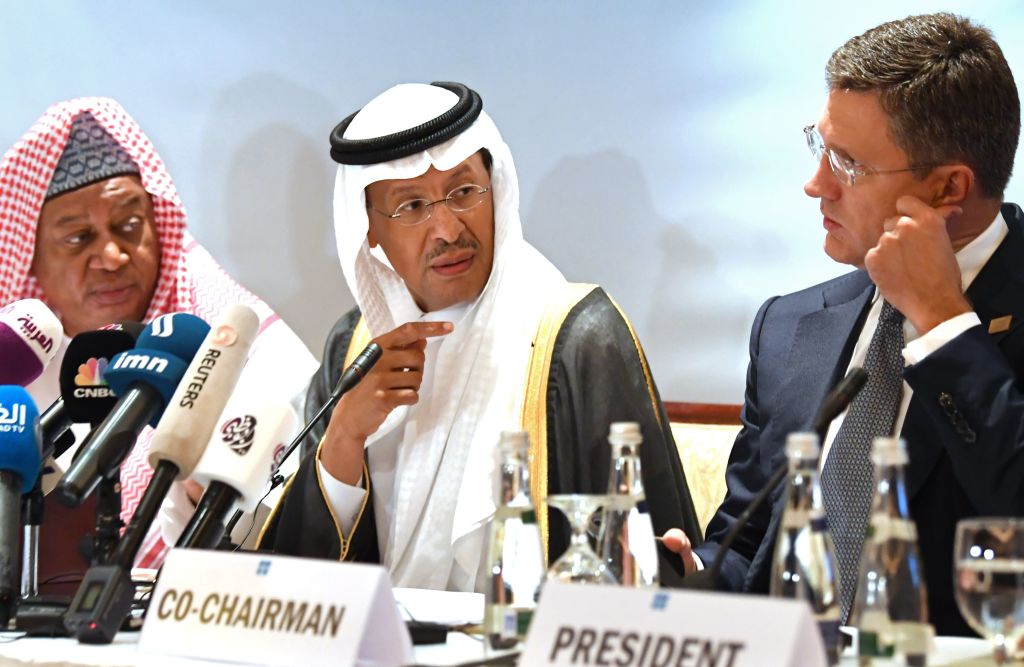 This story is being co-published with OilPrice.com.

The current optimism of analysts and the media that an end to the ongoing OPEC+ oil price spat is near is entirely unjustified. The ongoing oil market volatility, the battle between leading producers for market share, the logistical impossibility of enforcing U.S. production cuts, and the continued demand destruction caused by COVID-19 are not issues that can be solved by an OPEC meeting. Immediately after Trump’s latest OPEC twitter offensive, Saudi Arabia and Russia came out with critical statements about the impact and influence of the U.S. president on the matter.

While Putin and Mohammed bin Salman are reluctant to bash Trump, the real power when it comes to the oil market does not lie with the U.S. President. The tweet by Trump claiming that MBS and Putin would agree to a 10+ million bpd production cut shows not only his overestimation of his own power over the two countries, but also shows a lack of knowledge about the underlying market fundamentals and the current demand destruction worldwide.

As former U.S. president George W. Bush stated during his election campaign, which did not end well as we know, “it’s the economy stupid” that matters in the end. Trump’s tweets and general approach to this matter suggests he and his administration are out of touch with reality. Even if a Saudi-Russian combination would cut 10 million bpd, the oil price reaction would be minimal and very short-lived. At present, leading oil market experts such as Vitol, Trafigura and Goldman Sachs are warning of a total demand destruction of 20 million bpd or more.

When looking at the cuts in global refinery runs, we have already hit levels of -17 million bpd or more. Downstream companies are cutting back on all production as demand from industry and consumers worldwide collapses. Lockdowns in more than half the world are having a major impact, hurting demand for oil, gas and other kinds of energy. Cutting 10+ million bpd of production is not a real solution and it could even cause markets to react negatively. When production cuts fail to send oil prices up, the fear in the market could hit historical highs, causing oil prices to fall to levels below $10 per barrel in the coming weeks.

The upcoming “OPEC+ and Friends” meeting is going to be a very tricky one. There is the very real possibility of the meeting failing as the targets that have been set are totally unclear. Saudi Arabia, probably supported by Abu Dhabi, called an emergency meeting, not only of OPEC+ members but of all oil-producing nations. That means that, at least according to Western media, the U.S. is invited and will likely attend.

In inviting the U.S., it seems that Saudi Arabia has called Trump’s bluff because by attending the meeting Washington will be implicitly stating that a possible production cut agreement would include the U.S. When looking at the U.S. upstream oil and gas sector there is one thing you can state without any analysis….

Washington and U.S. oil and gas operators are not on the same page. Suggestions of Washington being able to control or even force U.S. oil to cut production, even via legislation, are ludicrous and would end in a mammoth legal battle. Even if only Texas representatives attend, oil companies will be unlikely to comply, it is simply not in the U.S. oil and gas DNA to work together on an international level. Free market economics is a cornerstone of U.S. society and business.

The second major threat at the Monday meeting is that Saudi Arabia not appear to be at all convinced that it needs to change its current tactics. Its targeted goals of regaining market share, forcing Russia to come to the table and bringing non-OPEC producers such as U.S. shale to their knees are working well. Several Saudi officials have stated that they are willing to discuss a new agreement but only under the conditions that potential production cuts will be on the shoulders of all, not only Saudi Arabia, Russia, and UAE. In this light – Trump’s demand for a more than 10 million bpd cut from Russia and Saudi Arabia is unrealistic, to say the least.

Russia’s position has, until now, remained unclear. While Putin is still acting as though he has nothing to worry about, Russian oligarchs and the Russian leader are happy to debate any options that are on the table. For Russia, the current position taken by Trump is being seen as an opportunity to get some gifts from the U.S. very soon.

Russia might consider cooperation with the U.S. if Washington agrees to bring an end to Russian sanctions. But that is not as important to Moscow as a strong relationship with Riyadh and OPEC going forward. Future opportunities with Saudi Arabia are more attractive to Putin than a positive relationship with a President that may not be re-elected this year.

While all eyes will be on Washington, Riyadh, and Moscow in the coming day, there is a fourth group that is going to be vital at Monday’s meeting. In order to reach a 10 million bpd cut, OPEC will have to convince all other oil-producing countries to contribute. At present, convincing such a large list of independent nations to join these efforts seems unrealistic. Countries such as Libya, Iran, Iraq, Brazil, and Canada, are unlikely to agree at present to cut production. This is yet another reason that the OPEC meeting will likely fail on Monday.

The real fear for markets at the moment should be sentiment and expectation. After Trump’s tweet cited a 10-15 million barrel per day cut, oil prices have soared and anything less than that will be seen as a failure. After what is looking set to be a fairly quiet weekend for energy markets, a Monday failure with plenty of media attention is likely to drive markets into a frenzy. This fear, combined with continued demand destruction could serve as a serious problem for oil markets next week.

With this in mind, the rational short-term approach of OPEC+ should be, especially for Riyadh and Moscow, to not move at all. Don’t increase production, stand on the quay and watch the U.S. shale and non-OPEC VLCCs fill oil storage to the brim. If OPEC+ cuts without the assistance of other nations it will lose future leverage and markets may crash anyway. By doing nothing, Saudi Arabia and Russia can maintain the illusion that a production cut from OPEC+ would save markets.

By Cyril Widdershoven for Oilprice.com