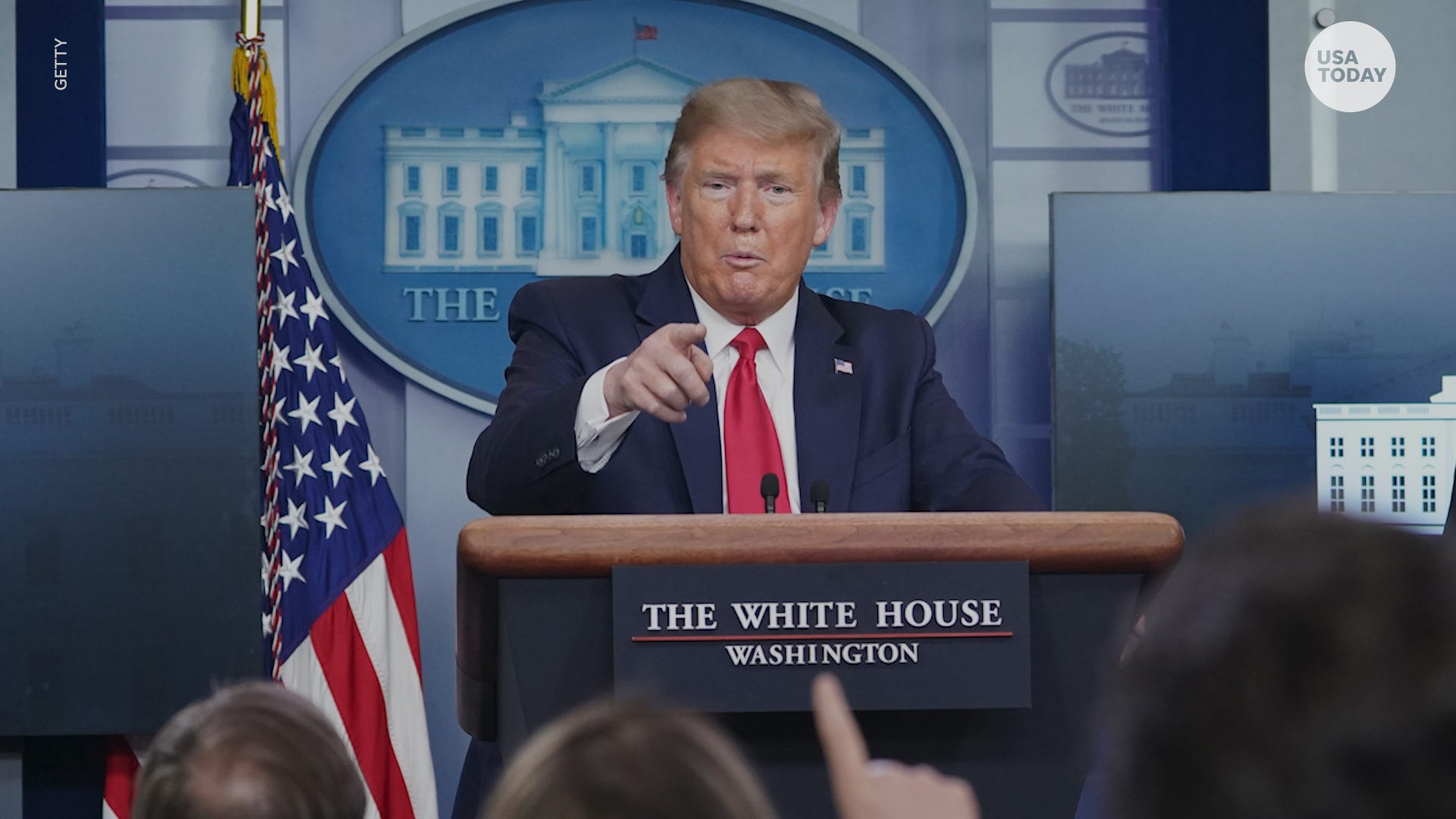 President Donald Trump said Friday that U.S. intelligence officials are investigating whether the novel coronavirus began spreading after an accident at a Chinese high-security biomedical laboratory in Wuhan.

Trump offered no evidence supporting that scenario. And aides stressed there have been no conclusions from the ongoing investigation, which ultimately may never resolve questions that have surfaced.

“We’re looking at it,” Trump told reporters Friday during a COVID-19 briefing at the White House. “A lot of people are looking at it – it seems to make sense.”

Since January, theories about a possible leak at the Wuhan Institute of Virology have circulated largely among right-wing bloggers, some conservative media pundits and pro-Trump hawks on China.

One scenario in circulation claims the virus was man-made and was linked to a Chinese biowarfare program, but that idea has been widely dismissed by experts and critics as a conspiracy theory. Another scenario maintains that the virus, while being kept in the lab in a natural state, accidentally escaped due to poor safety protocols.

Anthony Fauci, the U.S.’s top infectious disease expert, was dismissive of the theory of an accidental escape.

“A group of highly qualified evolutionary virologists looked at the sequences in bats as they evolve. The mutations that it took to get to the point where it is now are totally consistent with a jump of a species from an animal to a human,” he said Friday in the White House press briefing in response to a reporter’s question on the theory.

But two administration officials with knowledge of the investigation, speaking to USA TODAY on condition of anonymity because it is classified and sensitive, said they have always questioned China’s account of how the virus originated and have taken seriously suggestions that it may have resulted from a lab accident that the Chinese are covering up.

“There’s a high level of suspicion,” one official said.

But the officials emphasized that no conclusions have been drawn from the investigation and that it is not a primary focus right now for Trump and his top aides, whose concern, they said, is to stop the spread of the virus in the U.S., re-open the economy and government and try to return to some semblance of normalcy.

There will be plenty of time to review China’s actions down the line, the two officials said. Diplomacy, with trade relationships at stake, is one reason the probe requires delicate handling, they said.

Chinese officials and scientists have repeatedly dismissed the allegations

“China believes the origin of the virus is a scientific issue that has to be seriously handled,” Foreign ministry spokesman Zhao Lijian said Thursday. “The World Health Organization said there is no evidence proving that it is made in a lab. And many renowned medical experts have also said that the claim that the virus leaked from a lab has no scientific basis.

“China will continue to work with other nations and support each other.”

But China’s lack of transparency over its COVID-19 outbreak has helped give oxygen to theories about the origin of the virus.

“Until the Chinese government convinces me otherwise I’ll continue to argue that the most likely explanation is that this virus was one of thousands of viruses that were being kept in bio labs in Wuhan and that a lab worker got infected,” said Steven Mosher, a China expert and president of Population Research Institute, a Virginia-based pro-life advocate whose blog posts and opinion columns in the New York Post and elsewhere were among the first to float uncorroborated theories about an accidental leak.

“It’s also possible an infected animal was sold from the lab – a horseshoe bat, probably – to the nearby wet market for a very good price. It was then butchered on the spot, bloody and dripping, and wound up on someone’s dinner table and the virus infected somebody in that process,” Mosher said, describing a purely theoretical scenario.

Mosher conceded he can’t prove anything and that his ideas are based on conjectural factors such as Wuhan being a center for coronavirus research in bats, China’s reported dangerous lab safety record and Beijing’s obfuscation on the pandemic.

Beijing has clouded and revised information about its infections and deaths and detained medical workers who blew the whistle over concerns about China’s handling of its response. An Associated Press investigation found China didn’t inform the public about the virus for nearly a week, enabling it to spread undetected at a vital moment. China’s foreign ministry spokesman Lijian Zhao has also pushed a false counter-narrative that coronavirus originated with the U.S. military.

In late January, Dany Shalom, a former Israeli military intelligence officer, said in a Washington Times newspaper article that the Wuhan Institute of Virology is linked to a Chinese covert bio-weapons program. He did not provide any evidence. He noted the relative proximity – about 20 miles – of the institute to Wuhan’s seafood market, which China originally pinpointed as the possible origin of the virus.

Shalom did not want to comment further on his claims when contacted by USA TODAY.

On March 25, the Washington Times appended an editor’s note to its story in which Shalom appears saying scientists outside of China concluded that COVID-19 “does not show signs of having been manufactured or purposefully manipulated in a lab.”

Analysis:Trump halts funding to WHO.Experts say we need it now more than ever

But the exact origins of the virus remain murky.

In a March 11 interview with Scientific American, Shi Zhengli, one of China’s leading experts on bat coronaviruses and deputy director of the Wuhan Institute of Virology, said that when her team sequenced the genome of the new coronavirus in Wuhan it did not match any of the bat coronaviruses her laboratory had previously collected and studied.

A research paper by a group of Chinese scientists published in January by The Lancet, a well-respected British medical journal, revealed the first COVID-19 patient, identified on Dec. 1, had no apparent connection to Wuhan’s wet market. Nor did about a third of the initial large cluster of confirmed cases, a revelation that’s raised eyebrows.

Further muddying the picture, Nobel Prize laureate Luc Montagnier, co-discoverer of HIV, released a statement Friday claiming that according to his analysis COVID-19 was the result of an attempt to manufacture an AIDS vaccine that escaped a lab. Montagnier’s analysis has not been peer-reviewed. In recent years the Frenchman has been involved with controversial research that’s been shunned by mainstream scientists.

Washington Post columnist Josh Rogin reported this week that two years before the coronavirus pandemic, U.S. embassy officials visited a Wuhan lab and sent cables back to Washington about inadequate safety standards at the research facility, which was studying coronaviruses from bats. Rogin said that while the cables have prompted discussion within the administration, “conclusive proof has yet to emerge.”

US Sen. Tom Cotton, a Republican from Arkansas who is a staunch China hawk, has floated claims about a “cover up” by Beijing.

“The Chinese Communist Party has continued to lie about this from the very beginning, as if they have something to cover up,” Cotton said in an interview on the Fox & Friends television program on Friday morning. “If that’s the case, it really is the biggest, the costliest, the most deadly cover up in the history of mankind,” he said.

U.S. military planners have been non-committal about the coronavirus investigation.

“There’s a lot of rumor and speculation in a wide variety of media, the blog sites, etc. It should be no surprise to you that we’ve taken a keen interest in that and we’ve had a lot of intelligence take a hard look at that,” Army General Mark Milley, chairman of the Joint Chiefs of Staff, said in a Tuesday briefing at the Pentagon.

“And I would just say, at this point, it’s inconclusive, although the weight of evidence seems to indicate natural. But we don’t know for certain,” said.

“A lot of strange things are happening,” he said. “We’re going to find out.”