The Tiger King Joe appears to be reveling in his new-found fame, telling Netflix he wishes he could see himself “being famous” while he remains in mandatory quarantine after a prison transfer following possible contact with a person carrying the new coronavirus.

Joe Maldonado-Passage—or Joe Exotic—is the “mulleted, gun-toting” star of Netflix’s breakout hit, The Tiger King. He is currently serving a 22-year sentence for animal abuse and murder-for-hire charges and is completing a 14-day quarantine after potentially coming into contact with someone with COVID-19.

On Friday, Netflix shared an interview with Joe Exotic, taken last month from prison. When asked what it is like to see the show become so popular, he said he would like to see it for himself.

‘Tiger King’ on Netflix: Does Joe Exotic Have Coronavirus?

“You know it would be nice if I could actually see me being famous out there but I’ve seen these same four walls for a year and a half now,” he said.

Joe Exotic is the self-titled “Tiger King” of a roadside zoo based in Oklahoma, a character described by Netflix as a “mulleted, gun-toting polygamist and country-western singer.”

Joe has courted fame for years, taking to YouTube to share footage of the zoo’s cats and rants against Carole Baskin of Big Cat Rescue as well as his own country music videos.

Joe has even featured in a professional reality TV show produced by Rick Kirkham, who followed Joe and the happenings at his zoo—until hours of footage were burned during a mysterious fire. But it is Netflix’s true-crime docuseries, which launched on March 20, that made Joe Exotic a household name.

In an interview with the Los Angeles Times, co-directors and writers Eric Goode and Rebecca Chaiklin said Joe was “ecstatic” about the success of the show. According to Chaiklin, it is hard to talk to the man without him bringing up the level of the press he is getting.

“He says people are asking to see his Prince Albert and girls are sending him sexy bikini pictures even though he’s gay. He’s over the moon,” she said.

In the interview, Netflix asked Joe if there was anything he wanted fans of the show to know. The Tiger King appeared to have some regrets, telling viewers, “When I left the zoo and sent my chimpanzees to the sanctuary in Florida and imagined what my chimpanzees went through for 18 years, I’m ashamed of myself.”

But things appear to be going well with his fourth husband Dillon Passage. “I can’t thank my husband enough for staying beside me,” he said.

As for his notorious beef with Big Cat Rescue owner, Carole Baskin, whom he hired a look-a-like of to star in his music video “Here Kitty Kitty”—he says he is ready to put past fights behind him.

“I’m done with the Carole Baskin saga,” he said, telling Netflix it was “time to turn the tables” and “get out of jail a free man.”

“When I walk out of here, am I going to be as crazy as I was before? That will never change,” he said. 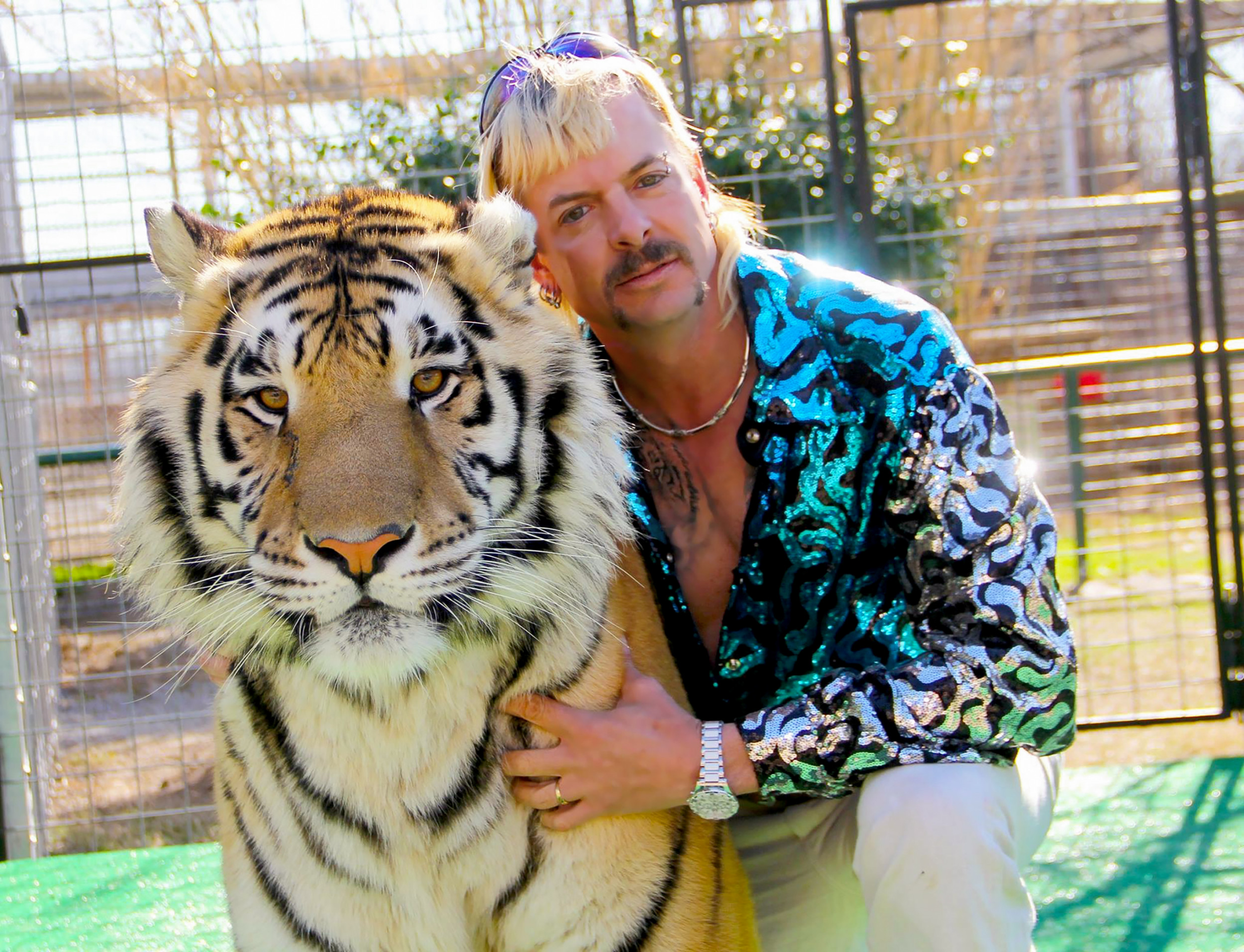