Executive assistants once ran the office. Increasingly, the office runs without them.

The decline of what has been a solid career path for women without college degrees has been quiet and gradual, but in magnitude it has mirrored the downturn in blue-collar factory work, economists say.

Technology and automation have chipped away at duties like papers to be filed and landlines to be answered. A new generation of corporate leaders are content to schedule meetings and book flights on their own. Glad to cut costs, companies have culled their administrative ranks, transformed the role for many of those who have managed to hang on and moved some positions to cheaper parts of the country.

Out of the Office

The loss of secretarial and administrative-assistant jobs in the U.S. since 2000 is as dramatic as the much-publicized decline in manufacturing. Wages have remained fairly stagnant in both sectors, even as a far higher share of office workers now have college degrees. 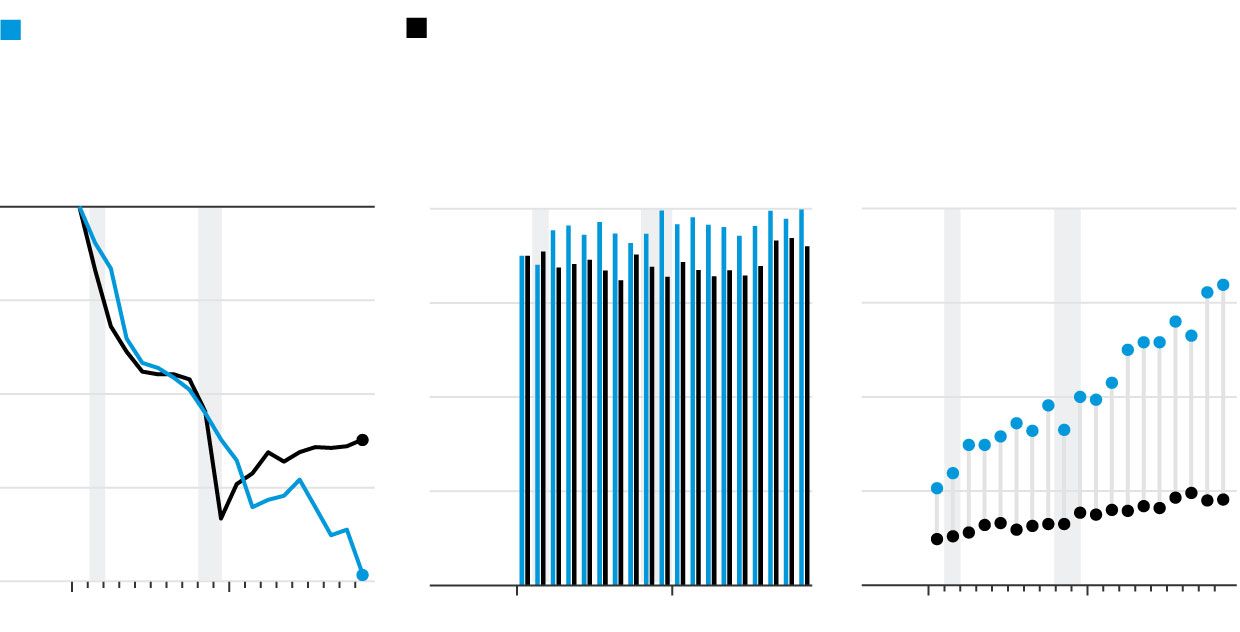 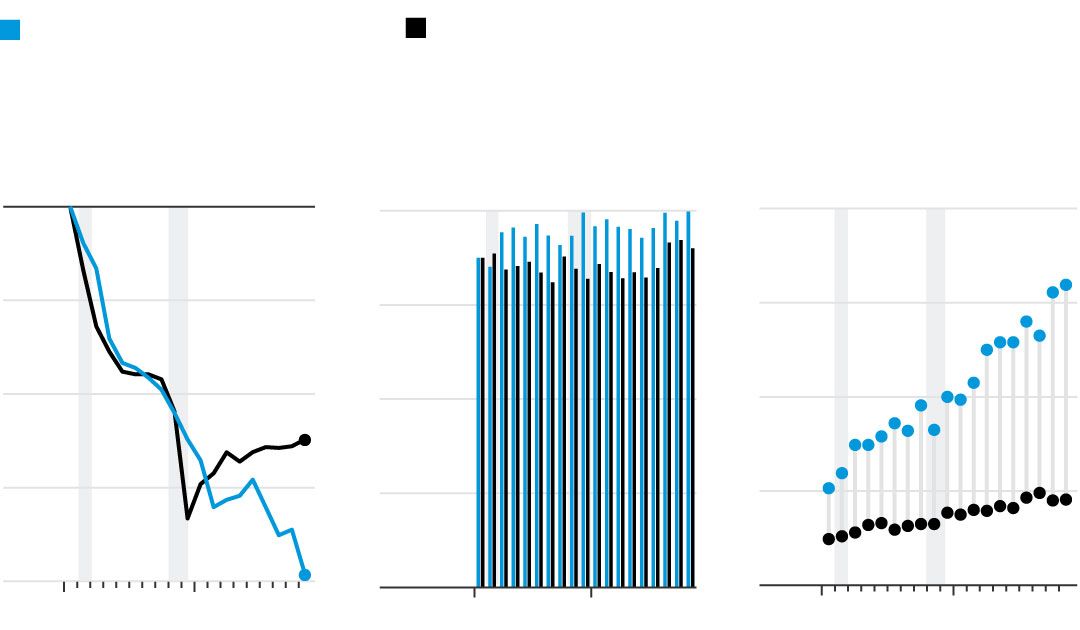 More than 1.6 million secretarial and administrative-assistant jobs have vanished since 2000, according to federal data, an almost 40% decline, comparable to that in manufacturing. The losses haven’t garnered much notice. Unlike a plant closing that leaves thousands of Americans unemployed in one go, jobs in a traditionally female sector have evaporated in dribs and drabs.

At the pinnacle of the sector were the executive assistants, a 95% female workforce, according to labor-market research firm Emsi, that could make as much as six figures.

When Jessica Schiffman, 42 years old, left her executive-assistant job at the National Hockey League in 2015 to help care for a sick family member, she assumed it would be no problem to find work again.

She landed a job the following year at Anheuser-Busch, but was shocked by the open office and lack of desk phones and filing cabinets. There were few assistants, and the gig only lasted four months. Ms. Schiffman was laid off again from a subsequent job and has spent most of the past two years searching for work that will last. “I want to find a place where I don’t have to look for another job in another two years,” she says.

She even went back to the NHL and asked if there was anything she could do there—there wasn’t.

During her years at the hockey league, she had her boss’s favorite salad committed to memory, down to the dressing. In her more recent stints, she was out of a job before she had a chance to learn such details about her executives.

“You don’t have enough time to make those close relationships with people,” she says.

An Anheuser-Busch spokesman says that of the 3,500 employees in Anheuser-Busch InBev SA’s North America division, only about 30 or 40 top managers have dedicated executive assistants.

Details on the work experience of executive assistants are hard to come by. Several current and former assistants cited fear of repercussions for giving any details about their job duties or salaries. Both assistants and managers often sign nondisclosure agreements upon leaving a company. This article is based on conversations with a dozen executive assistants across various sectors—some employed and some looking for work—and with company executives.

Many of the women whose positions vanished are now in their 50s and 60s and some are finding that the only jobs they can get are low-paying and often physically demanding, such as stocking shelves or ferrying ride-hail passengers. The workers taking their place are often younger with college degrees; some make half as much money while supporting more executives.

That’s the model at Ernst & Young.

The U.S. affiliate of the big accounting and consulting firm has hired 460 remote executive assistants in five low-cost cities, including Tucson, Ariz., and Louisville, Ky., who support executives in places like Manhattan and Los Angeles. Many of the traditional executive assistants are gone.

Ernst & Young piloted the remote program in 2014 after realizing that due to business travel, partners were increasingly away from the offices where their assistants sat, says Megan Hobson, an Ernst & Young partner who oversees administrative operations. “If somebody’s not in our office, yet we have somebody commuting into the office to be their assistant, where’s the disconnect?” she says.

There is no round-the-clock administrative support for partners and directors, says Ms. Hobson. If somebody has a canceled flight, they call travel services themselves. They’re told to keep their personal lives separate, she says—no one is picking up their dry-cleaning.

“This model offers new benefits and broader opportunities for our executive assistants and is beneficial to meeting changing business needs,” says a spokesman for Ernst & Young. He says age doesn’t figure into hiring decisions.

Several former assistants at Ernst & Young say they got an inkling their roles might be in jeopardy a few years ago, when the firm required them to pass a series of tests on PowerPoint and Excel. Some assistants were let go in late 2016, say former assistants.

The Ernst & Young spokesman says the total number of executive assistants at the firm has increased 16% in the years since it started the remote centers; he wouldn’t provide details on how many traditional assistants had left.

“We were the glue for everything. We were so important at one time,” says one former executive assistant who signed a nondisclosure agreement when taking a buyout in 2018 after nearly three decades at Ernst & Young. “We’re a dying breed.”

Ernst & Young threw retirement parties for the departing assistants and handed out $500 gift cards to Tiffany & Co. One woman says she and some others who worried about paying their bills sold the gift cards for cash.

Many executive assistants across various sectors described feeling overworked and expendable, sometimes at the same time. With more executives to support, their days have become a grind of small, tedious tasks, with no time to learn the preferences of their bosses.

“Sometimes I do 13 expense reports in one week. Who has time to bond?” says Lisa Jordan, an executive assistant in New Jersey who has worked for companies including AT&T and Verizon.

The number of executive-secretary and executive-administrative-assistant jobs fell 23% over the last five years, according to Emsi. The U.S. Bureau of Labor Statistics projects those jobs—which it says numbered 622,500 in 2018—will drop another 20% to below 500,000 by 2028.

The experiences of some executive assistants mirror bigger changes in the workplace in recent years: the frenetic pace, an onslaught of meetings and flatter hierarchies. The trappings of executive life—separate dining rooms, reserved parking spots, private offices and assistants that help run their lives—have faded away.

And technology has replaced much of the administrative tedium—the memos to be typed, the boxes of files to be pulled from storage—that marked the “Mad Men” days when secretaries kept the workplace humming.

“There’s always going to be people left behind by these changes,” says Eliza Forsythe, a professor of labor and employment relations at the University of Illinois at Urbana-Champaign, who has found that as technology takes over many tasks, “pink-collar” roles—those mostly filled by women without college degrees—have lost earning power and status.

Has administrative support at your job changed? How has that impacted your work? Join the conversation below.

“There’s fewer people working in these jobs but the people remaining are doing more intensive tasks and more higher-skilled tasks,” she says.

Up to 10 million women across six mature economies, including the U.S. and Canada, will need to switch roles or careers by 2030 as their office-support jobs disappear, according to McKinsey Global Institute, the research arm of the consulting firm.

Mekala Krishnan, a senior fellow at the institute, says she worries the women will have more trouble than men preparing for and shifting to new jobs, because they may have greater responsibilities at home and less freedom to move geographically.

One former Ernst & Young assistant who accepted a buyout took a job last year working for a hospital system. For $11,000 less a year than her Ernst & Young job, she supported 86 people, doing everything from managing office supplies to fielding workers’ complaints about the air conditioning. She left after a few months.

“It really was a position for three people,” she says.

Now she spends her mornings looking for work while making ends meet by picking up 4 p.m.-to-midnight shifts at Trader Joe’s.

Remote executive assistants at Ernst & Young support an average of seven executives, says Ms. Hobson. The assistants are generally recent arrivals at the firm. One, who supports 11 executives, says it is better than her old job, assisting an office of 25 at a university. She mostly helps people in other time zones, and rarely gets called on after hours. She makes $44,000 a year, which she says is enough to live on comfortably.

The change from the old model caused some discomfort at first, Ms. Hobson says. Recently retired Ernst & Young partners who had in-person assistants say they were on the road so much they rarely saw them. But they recall the assistants tracking their children’s birthdays, keeping an eye on the weather where they were traveling and—as one retired partner recalls—waking up in the middle of the night to make sure a car was waiting at an airport in India.

“She was basically co-running my life,” the retired partner says of her assistant of nine years.

Others have embraced life without admins. Dana Muldrow had a remote assistant while working in communications at Accenture, but felt unsure what tasks to assign her. When she moved to Ernst & Young in 2015 and wasn’t offered an assistant it was almost a relief, she says.

“It’s one less person for me to manage,” Ms. Muldrow says.

Nancy Wong is hoping she’s not a casualty of executives’ shifting preferences. She was out of work for about a year in New York after being laid off from an executive-assistant role in 2018 and worked several temporary gigs before one turned into a permanent role late last year. While applying for jobs, she noticed that companies added extra duties, including “business analyst,” to administrative roles and demanded a college degree. At 55, with 30 years of experience, Ms. Wong says she’s not going back to school.

When she started out, she often worked for midlevel professionals still making their way up the corporate ladder.

“Now they don’t have an assistant,” she says. “They take care of themselves.”

Ms. Schiffman, the former Anheuser-Busch assistant, finally started a new assistant job at a public-relations firm earlier this month. She took a pay cut and remains nervous about the gig lasting. But she’s trying to be positive and confident. On her bathroom mirror is a sticky note with a smiley face and the words “I’ve got this.”

“I look at it every morning,” she says.