Oklahoma State University football coach Mike Gundy earlier this week said he thought his entire program could return to the Stillwater campus by May 1. He said healthy athletes could fight the virus, and anybody sick would be quarantined as if they had the flu.

On Saturday, Gundy backtracked and apologized.

“I have been made aware that comments from my press conference have offended some,” Gundy said in an ESPN.com story. “It was never my intention to offend anyone and I apologize. My first priority is and will always be the student-athletes and doing what is best for the program and the university.”

Gundy said during a teleconference last Tuesday with reporters he thought his players, coaches and staff could return so they could begin getting ready for a 2020 football season—if it actually happens

“How fast that can happen based on the tests that are available, I can’t say right now, but that’s the plan,” Gundy said. “We have to have a plan, and the plan right now is for them to start on May 1. It might get backed up two weeks. I don’t know, I can’t make that call, but if it does, we’ll start with the employees of this company, the ones that come in this building. Then we’ll bring the players in, and slowly but surely we’ll test them all in.”

Gundy said his staff often treats players and coaches with the flu, and those people get quarantined until they are well. He said the same could be done while with coronavirus.

“We get people that get the flu during the season, we quarantine them, we treat them, we make sure they’re healthy, we bring ’em back,” Gundy said. “It would be the same thing here, but at some point, we’ve got to go back to work. We’ve got to get these guys back in here.

“From what I read, the healthy people can fight this, the antibodies make it better. They’re doing some blood transplants now with the people that have already gotten the disease, that have gotten over it that have the antibodies that can fight it. There’s a lot of people who can figure this out. May 1’s our goal. Don’t know if it will happen. Players will come in after that.”

Gundy added that although there may be older people working within the program, or some with underlying health conditions, he said the majority of his program consists of older teenagers and those in their early 20s. 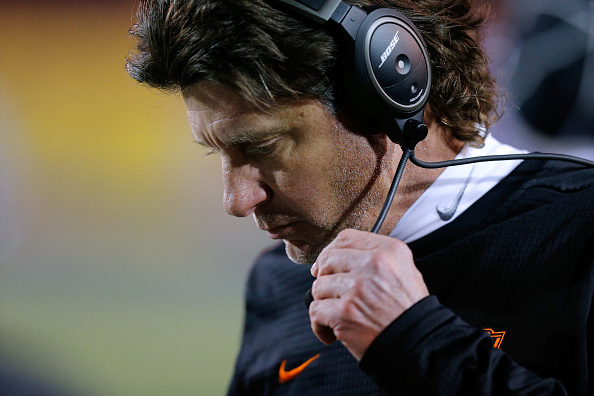 “Maybe they don’t come back,” he said, “but the majority of people in this building who are healthy … and certainly the 18-, 19-, 20-, 21-, 22-year-olds that are healthy, the so-called medical people saying the herd of healthy people that have the antibodies may be built up and can fight this? We all need to go back to work.

“I’m not taking away from the danger of people getting sick,” Gundy said. “You have the virus, stay healthy, try to do what we can to help people that are sick. And we’re losing lives, which is just terrible. The second part of it is that we still have to schedule and continue to move forward as life goes on and help those people.”

After Gundy made the remarks last Tuesday, the school’s athletic department issued a statement that said it would follow guidelines set by federal, state and medical authorities, along with those set by the Big 12 conference.

“We will adhere to the advice of public health experts who are making informed decisions in the best interest of the citizens of our nation and state based on sound scientific data,” the statement read. “We will also abide by the federal and state mandates as well as Big 12 guidelines. We will not compromise the health and well-being of our campus community. This virus is deadly and we will do our part at Oklahoma State to help blunt the spread.”

Sports in America, and around the globe, have come to a complete because of coronavirus, also known as COVID-19. The NCAA last month shut down its championships for the remainder of the 2019-2020 academic year, which meant canceling the men’s and women’s basketball tournaments in their entirety, and no spring championships, which include baseball, softball, lacrosse and track and field.