Meghan Markle left National Theatre bosses fuming after ‘carrying on as normal’ and giving no hint her patronage could be under threat during a visit hours before she and Prince Harry dropped their royal bombshell.

The Duke and Duchess of Sussex announced on Wednesday that they would step down as senior royals and live in Canada – a move that puts their 18 patronages under threat.

The news was posted on social media some six hours hours after Meghan’s midday visit to the London venue, leaving flummoxed bosses fearful that they could now be ‘abandoned’ after a 45-year partnership with the Royal Family. 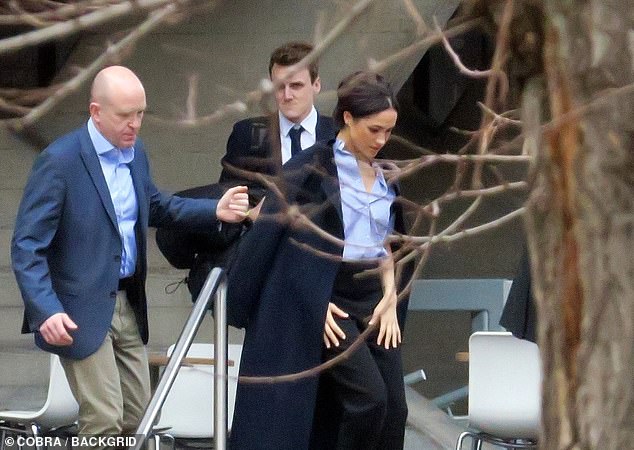 One senior official at the venue told The Mirror there was a ‘lot of worry’ about whether the Duchess would ‘stick around’ following the announcement.

He added: ‘She was seen as the perfect advertisement, she appeals to a cross section of ages and genders and it was hoped she would be a real force for change in the industry. We hope she doesn’t abandon us.’

Meghan’s patronage of the National Theatre was handed to her by the Queen. She has three other sole patronages: The Association of Commonwealth Universities; women’s employment charity Smart Works; and Mayhew, an animal rescue centre.

Prince Harry holds 14 patronages, ranging from charities to several branches of the Armed Forces, including RAF Honington and the Royal Marines.

It is unclear what the future holds for these relationships after the Sussexes revealed plans for a new ‘charitable entity’ of their own.

On their new Sussex Royal website it states: ‘In 2020, The Duke and Duchess of Sussex plan to shape their charitable entity to respond to these pressing needs.

‘After carefully considering a number of foundation models, and having researched the incredible work of many well-known and lesser known foundations, The Duke and Duchess are actively working to create something different.’

Earlier this week, Rugby Football League chief executive Ralph Rimmer said ‘all bets were off’ over whether Prince Harry would continue to support his organisation, despite saying he was ‘hopeful’.

Meghan and Harry claim the ‘geographic balance’ between Britain, Canada and the USA will facilitate the launch of their charitable foundation.

The issue of patronages is one of a range of areas that will need to be decided upon in the coming days and weeks. 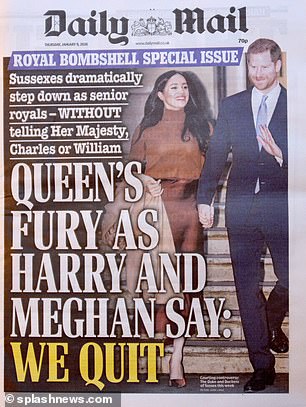 On Monday, Prince Harry met the Queen, Prince Charles and Prince William for crunch talks at Sandringham to discuss his future relationship with the Royal Family. Meghan was unable to attend because she was in Canada.

Following the meeting, the Queen released a statement saying she had agreed to a ‘period of transition’ for the couple during which plans for their future could be hammered out.

She said: ‘Although we would have preferred them to remain full-time working members of the Royal Family, we respect and understand their wish to live a more inde­pendent life.’

Harry is expected to return to Canada later this week to join his wife and Archie in the £14m Vancouver mansion where they are currently being hosted.

A spokesman for the National Theatre said: ‘The Duchess of Sussex attended a private meeting with Rufus Norris (artistic director) and Lisa Burger (executive director) where they had very positive discussions about the NT’s upcoming activity and engagement opportunities for the Duchess to engage with the work over the coming year.

‘There was no discussion in the meeting about the subsequent announcement made by the Duke and Duchess of Sussex which was issued several hours after the meeting had concluded.’

Which charities do the Sussexes support?

The Association of Commonwealth Universities

Duke and Duchess of Sussex

The Royal Foundation of the Duke and Duchess of Cambridge