Kate Middleton put on a dazzling display as she joined Prince William at the UK-Africa Investment Summit at Buckingham Palace today.

The Duchess of Cambridge, 38, opted for a glittering £410 red gown from high end high-street store Needle & Thread for the evening reception – a brand also loved by Princess Beatrice.

The mother-of-three’s showstopping gown featured silver shimmering sequins inspired by vintage lace tablecloth – and she complemented her outfit with a pair of Gianvito Rossi heels costing £510.

The engagement, which marked William’s first solo reception at the palace, comes after his brother Prince Harry, 35, jetted off to Canada to be with Meghan Markle, 38, after a deal was reached on their departure from the royal family. 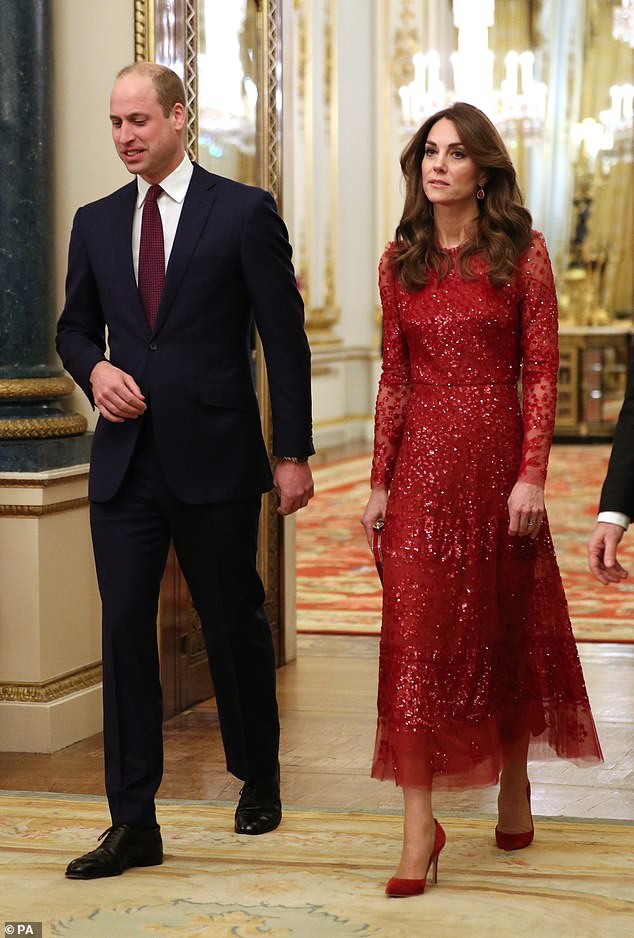 Kate Middleton, 38, donned a stunning cherry red £410 sequin gown by Needle & Thread as she arrived at the UK-Africa Investment Summit at Buckingham Palace this evening 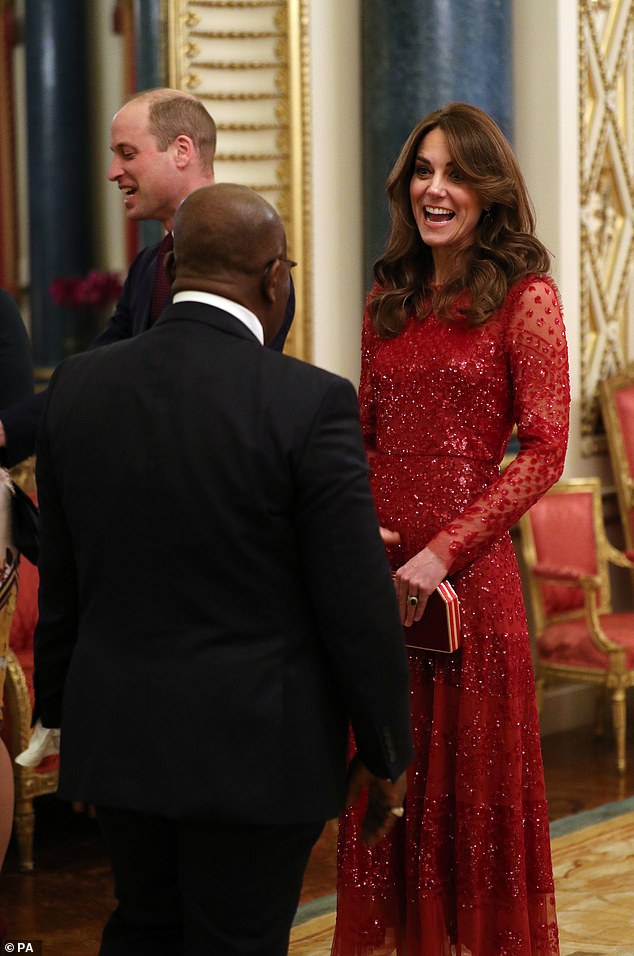 Kate accessorised with a coordinating red clutch bag and completed her glamorous ensemble with a pair of dangling ruby earrings.

The natural beauty wore her hair in her usual bouncy blow dry, and kept her make up natural for the occasion.

The royal’s brand of choice – Needle & Thread – is well-known within the royal family because it’s a favourite of Princess Beatrice.

The 31-year-old has stepped out in the brand, which is well known for its embroidered and lacy styles, from the retailer several times in the past few years. 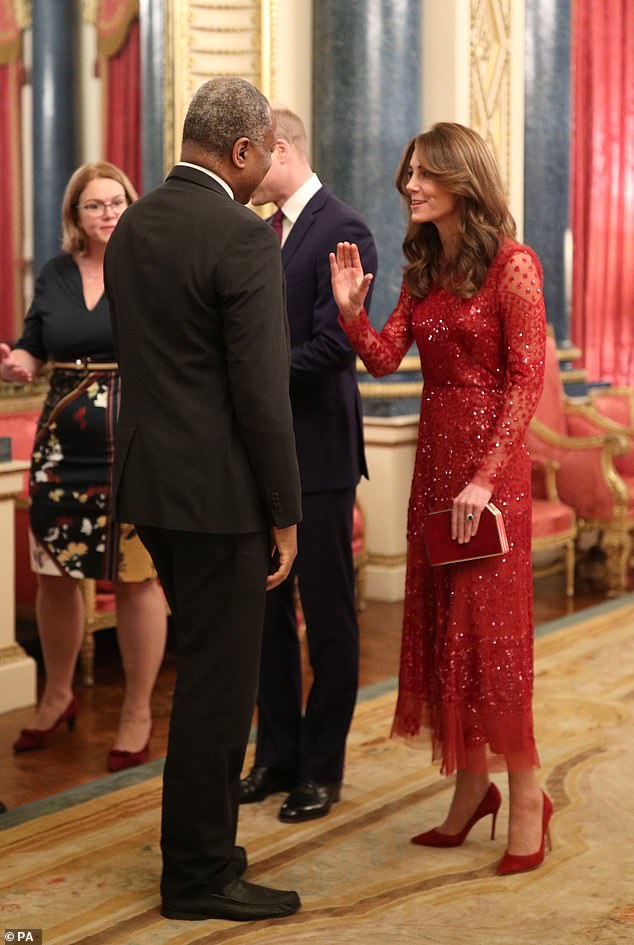 Kate (pictured) completed her outfit with a glamorous clutch bag and a pair of Gianvito Rossi heels, costing £510 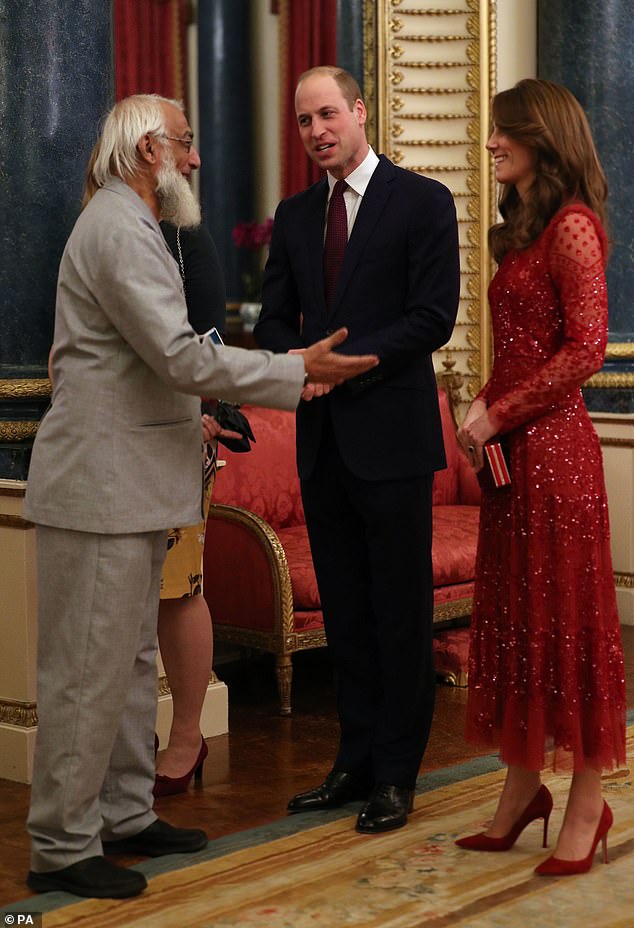 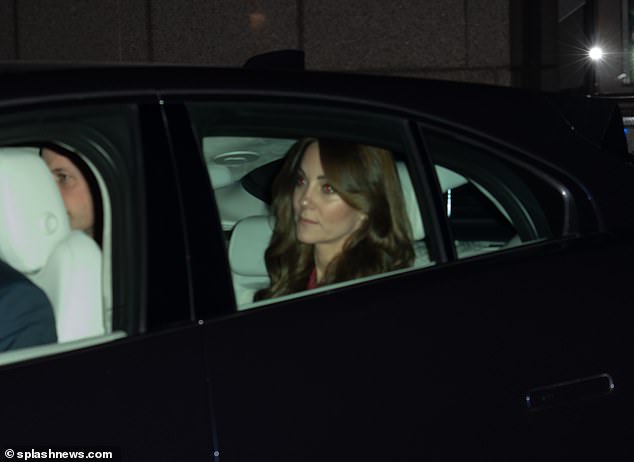 The Duchess of Cambridge was photographed in a chauffeur-driver ca as she arrived at Buckingham Palace today, in what marked her husband’s first solo reception

Kate’s husband Prince William coordinated with his wife perfectly in a smart navy suit and a matching red tie.

Tonight is seen as another stepping stone for William in the long preparation for him becoming king and will showcase the royal family’s new order post-Harry.

The Duke of Cambridge is being supported by his wife Kate, Prince Edward, his wife Sophie, Countess of Wessex, and Princess Anne, as the welcome 21 African delegations to the Queen’s London home.

The Queen and Prince Charles will not be in attendance at the reception to mark the start of the UK-Africa Investment Summit and Prince Harry is expected to fly to Vancouver imminently, in order not to overshadow his brother’s big night.

Harry had agreed to attend today’s summit before the Sussexes sensationally quit 11 days ago, and prior to quitting, he would almost certainly have been there to support his older sibling, who for the first time was asked by the Queen to host a major state occasion.

Today it was claimed the Queen and Prince Charles decided not to strip Prince Harry of their HRH titles and Duke and Duchess of Sussex rank to avoid looking ‘petty’.