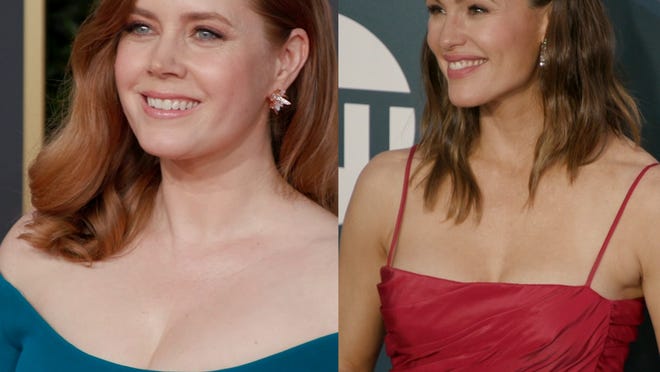 A young couple finds themselves trapped at home, isolated from the rest of the world as paranoia and tension rise.

We’re talking about the premise of the new Jesse Eisenberg movie – although these circumstances should sound familiar to all of us living through the global coronoavirus pandemic.

“Vivarium” is a sci-fi thriller about a couple experiencing a surreally intense form of social isolation as a routine house-hunting trip locks them into a labyrinthine nightmare.

“It’s so strange,” says Eisenberg. “I mean, you make a movie, typically inspired by something that’s occurring in present day, and then the movie comes out a year and a half later and is filtered through whatever is happening in culture at the time which, of course, you can’t foresee when you’re making the movie.”

All the movies streaming early amid coronavirus theater closures:‘Onward,’ ‘Sonic the Hedgehog,’ ‘The Lovebirds’

In the case of “Vivarium,” co-starring Imogen Poots, director Lorcan Finnegan and writer Garret Shanley were inspired by the recent housing shortage crisis in Ireland, according to Eisenberg.

“Now it’s coming out internationally during a global pandemic where people are isolating in their houses and also panicking about an invisible threat,” Eisenberg says. “And in some ways, the movie is more directly relevant to the current experience than it was to the experience that inspired it.”

Movie theaters across America are closing in response to the coronavirus outbreak, but both “Vivarium” and “Resistance,” Eisenberg’s other new film, will arrive Friday on video-on-demand and digital services.

“My background is in theater, and so I do dread the future of the medium I like the most, which is that you should perform live for people and that there’s an audience tightly sitting together, watching,” says Eisenberg. “So that’s more unnerving than anything else in terms of the future of performing” – though he acknowledges that his two movies “will probably a find a bigger audience now that they are coming out at times where we’re kind of forced to stay home.”

In a way, “Resistance” serves as a compelling counterpoint to “Vivarium.” The historical saga stars the “Social Network” Oscar nominee as a pre-fame Marcel Marceau, chronicling the future famed mime’s work saving the lives of Jewish orphans as part of the French Resistance during World War II.

“It’s kind of a more uplifting antidote to ‘Vivarium’ in the sense that (Marceau) is using his art to entertain kids in a dire situation where they have to literally quarantine themselves from the worst threat of all,” Eisenberg says..

Eisenberg, who has a 3-year-old son, says “Resistance” shows how art can be used in a selfless, benevolent way.

Marceau starts out as a “self-important artist who kind of becomes a reluctant hero and then devotes his life in the most dangerous of circumstances to saving children,” Eisenberg says. “For me, it makes me kind of question the value of performing and how it can be best utilized, especially during a crisis.”

Eisenberg also had a personal connection to Marceau’s story: The actor’s mother worked as a Marceau-inspired clown who would entertain hospitalized children. Eisenberg and Marceau’s families also hail from the same area of Poland, and both families lost members in the war.

“For me, the story is really about how we can use what it is that we do well to help others. If you’re a famous artist, how can you use that to the benefit of others, especially during traumatic times?”