President Donald Trump was not the only member of his administration’s Coronavirus Task Force on Saturday to question China’s very low death rate from the COVID-19 pandemic. His task force response coordinator had questions, even calling China’s rate “basically unrealistic.”

Dr. Deborah Birx, the White House coronavirus response coordinator, displayed a graph that shows the mortality rates of countries around the world, and China is at the bottom with the lowest rate.

Belgium tops the list with a 45.2 percent mortality rate, with the United States close to the bottom at an 11.24 percent rate. Then there’s China, with an asterisk next to its name, with 0.33 percent. Birx explained why China was on the chart, saying the country where coronavirus originated should have also been transparent when first dealing with the virus that became a global pandemic.

“I put China on there so you could see how basically unrealistic this could be,” Birx said. “When highly-developed health care delivery systems of the United Kingdom and France and Belgium, Italy and Spain with extraordinary doctors and nurses and equipment, have case mortality rates [percentages] in the 20s and up to 45 in Belgium, which has an extraordinary competent health care delivery system and then China at point-33.”

The coronavirus, first detected in Wuhan, China in late 2019, now has cases that have topped 2.3 million worldwide, with nearly 160,000 deaths around the globe by April 18. The United States leads all countries in both cases (734,000) and deaths (38,000). Birx suggested the numbers in China be much greater than they have been reported.

“You realize these numbers, even though this includes the doubled number out of Wuhan. So I wanted really to put it in perspective, but I also wanted you to see how great the care has been for every American that has been hospitalized.” 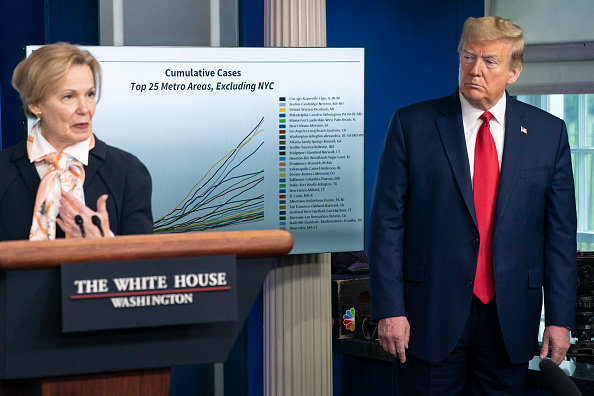 As Birx went to her next slide graph, Trump interrupted her and had White House workers go back to the previous slide. The president pointed at Iran’s 6.06 mortality rate, and then pointed at China’s 0.33 rate, saying “does anybody believe this number?” to each country he spoke of.

Birx went on to stress the importance that during a new disease, or pandemic, to have transparency where the virus or disease originated.

“It’s really important to have that level of transparency because it changes how we work as a nation,” Birx said. “It allowed us to make an alert on March 15 out there that vulnerable individuals and the need to protect them, and my call out to millenials to really protect their parents.

“There’s never an excuse to not share information. When you are the first country to have an outbreak, you really have a moral obligation to the world to not only talk about it, but provide that information that’s critical to the rest of the world to really respond to this crisis.

Birx then thanked the European countries and doctors that battled COVID-19 and relayed information back to American health officials.

Trump said during his press briefing Saturday that if China were responsible for the worldwide virus spread, then China should face consequences, unless it was a “mistake.”

Trump did not indicate what those consequences would be, but said China “made many mistakes” along the way, and that China was against the United States closing off Chinese travelers in January once the virus began its spread. He said “this crisis could have been stopped in China.”

“They didn’t like the idea of closing off our country. They said it was a bad thing to do, actually, and they’ve since taken that back,” Trump told reporters and TV audience. “But it was a very lucky thing that we did it. Very lucky. We would have had numbers that were very significantly greater. [Dr. Anthony] Fauci said that. He said, “it would have been very significantly greater had we not that.

“But it’s still a very depressing subject, because there’s a lot of death. If it were stopped very early on, at the source, before it started blowing into these proportions, you have 184 countries that would have been in a lot better shape.”