Coronavirus cases have soared past 1.28 million across 183 countries and regions, as of Monday, according to the latest figures from Johns Hopkins University. More than 265,400 people have recovered from infection, while more than 70,000 have died.

The U.S. is now the epicenter of the outbreak, with more than 337,600 cases confirmed, and is expecting a surge in deaths over the coming week.

Italy has reported new signs of the pace of the outbreak slowing down. Japan is expected to declare a state of emergency across the country as its capital Tokyo struggles to cope with a growing number of cases.

The latest figures mark a major decline in the rate of infections in Italy, which is among the nations worst-hit by the outbreak, with nearly 129,000 confirmed cases, as of Monday, including over 15,800 fatalities, the world’s highest death toll.

“The curve [of the spread of the virus] has started its descent and the number of deaths has started to drop,” the director of Italy’s national health institute ISS (Istituto Superiore di Sanità), Silvio Brusaferro, told reporters.

“If these data are confirmed (in the coming days), we will have to start thinking about Phase 2,” he added, referring to the possible easing of the country’s month-long national lockdown.

The head of the civil protection department, Angelo Borrelli, warned, “This good news [the recent decline in cases] shouldn’t make us drop our guard.”

While the country’s lockdown measures will be extended through Easter, the government is devising a five-point plan for opening up businesses in stages, while keeping several social distancing measures in place for some time, Italy’s Corriere della Sera newspaper reports.

Under the new plan, residents would be required to wear face masks at work and remain six feet apart in public at all times. Anyone showing the slightest of COVID-19 symptoms would need to be immediately reported to health officials and be isolated for two weeks. The country is also reportedly planning to build more hospitals specifically dedicated to COVID-19 virus patients across the country. 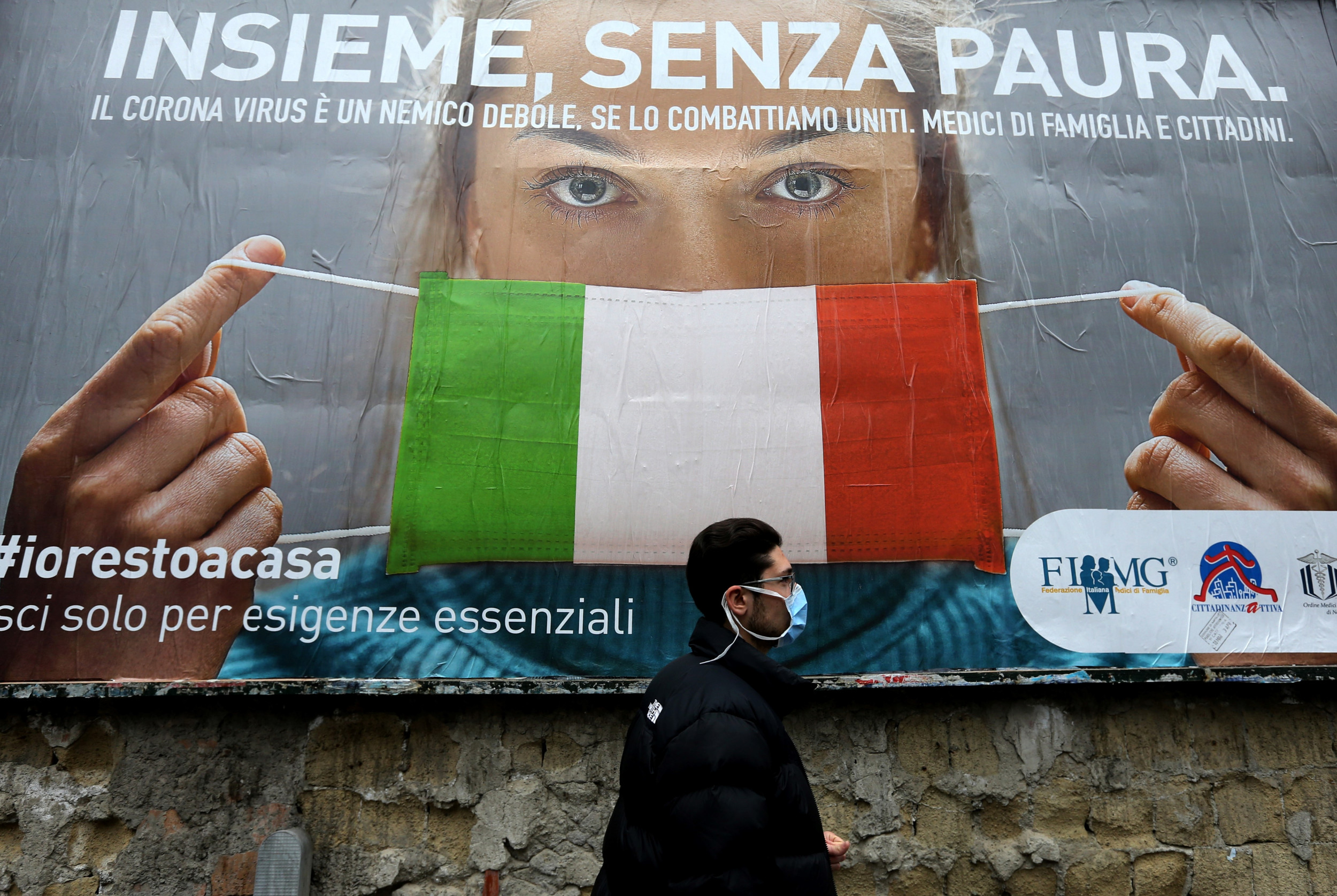 U.S. warned to brace for “hardest and saddest week”

Fauci: America Is ‘Struggling’ to Get Coronavirus Pandemic Under Control

The U.S. is expected to see a surge in deaths over the coming week and maintaining social distancing practices and other mitigation measures will be crucial in the next two weeks.

He added that “there is a light at the end of the tunnel if everyone does their part for the next 30 days.”

While New York continues to report a devastating total of confirmed cases, Cuomo noted that fatalities across the state have dropped for the first time over the past few days, the significance of which is “too early to tell,” he said at a press conference on Sunday.

The country, which formerly reported the most cases outside China, has been seeing less than 100 new daily cases for the past month. The latest figures are a significant decline from when it previously saw an exponential number of new cases (at least 500 or more new infections per day).

U.S. Base in South Korea Tests Visitors for COVID-19 with Apple Vinegar

But the country’s health officials warn a second major wave of cases could emerge at any time, with infections among various small churches, hospitals and nursing homes still on the rise, Reuters reports.

“We are taking great caution against any optimistic expectations with this one-off figure,” Kim said at a briefing.

The country’s rigorous testing and lockdown measures have been key factors for the containment of the virus. But movement among residents under quarantine orders has increased by 20 percent over the weekend, Kim confirmed.

Starting Sunday, the government has imposed stricter fines for those who violate self-quarantine mandates. Violators can face up to 10 million won ($8,100) in fines or one year in prison along with smaller fines.

The emergency declaration is likely to be made over the greater Tokyo metropolitan area and possibly Osaka and the Hyogo prefectures in western Japan, Yomiuri reports.

Under the declaration, governors in the affected areas would be able to require residents to remain at home and refrain from all activities except for grocery shopping and for providing essential services such as health care and transportation.

When Will the Tokyo Olympics Be Held? 2021 Games Dates Confirmed

Various public facilities and other places of large gatherings, including schools, social welfare facilities, theaters, music venues and sports stadiums, are also expected to be restricted or be closed temporarily.

A final decision has yet to be made on the emergency declaration, a spokesperson for the government, Yoshihide Suga, said. But any new measures would be in effect from Wednesday if the state of emergency is declared on Tuesday, according to The Japan Times.

A doctor specializing in infectious diseases at a major hospital in the greater Tokyo area told Reuters: “We could empty out an entire ward and use it just for corona patients, but that means those patients (with other illnesses) will have to go elsewhere.”

“If we can’t do that, it will lead to the virus spreading all through the hospital and lead to a collapse of our medical system,” the doctor added.

Japan recently postponed the 2020 Tokyo Olympics, which were due to take place this July, until next year due to the ongoing pandemic.

The graphic below, provided by Statista, illustrates the spread of COVID-19 in the U.S.

Data on COVID-19 cases is from Johns Hopkins University unless otherwise stated.