Our colleague Brian Truitt from the USA TODAY Life team is here to share some movies for the whole family.

Take it from a dad: There are only so many times you can watch “Frozen” and keep your sanity intact.

With parents and kids alike stuck inside courtesy of the coronavirus, families are spending lots more together, which means sharing escapist entertainment to quell the quarantined boredom of social distancing. Pixar’s “Onward” premiered early to stream, which helps a lot, and you’ve probably hit some of the classics already: “Frozen,” “Toy Story,” “The Lion King” and the like.

Need a coronavirus escape?: Here are 100 movies to watch for every cinematic yearning

Streaming movies: 6 tips and tricks for newbies to make it through a coronavirus quarantine

Finding the right movie to make everybody happy isn’t always easy – youngsters have different interests, and adults can be even more persnickety. Here are 25 movies, though (some obvious, others not so much) that are cool for kids of all ages. 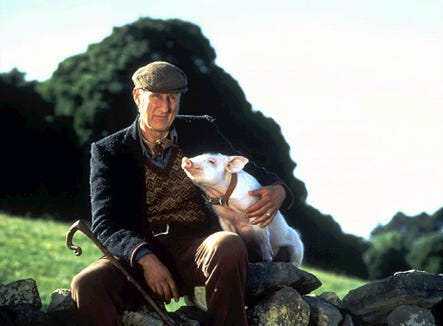 A farmer (James Cromwell) forms a special relationship with a pig in “Babe.”(Photo: UNIVERSAL PICTURES)

Not only will it make you rethink bacon, but this film about an orphaned piglet who goes from being an option for Christmas dinner to a champion sheep-herder will warm everyone’s hearts. Also, it features one of the best final movie lines ever: “That’ll do, pig. That’ll do.”

The Pixar movie about a guitar-toting Mexican boy who inadvertently is sent to the afterlife and learns about his ancestors while there will entertain all members of your family, especially the music fans. And you’ll definitely ugly cry at the end, but in that rousing, cathartic way.

Neil Gaiman’s children’s book gets the LAIKA stop-motion-animation treatment for something special, marrying dark fantasy with a child’s curious nature. The title girl ventures to an alternate world where its version of her parents are nicer than her own, and then things get really twisted in LAIKA’s modern fairy tale.

Where to watch:Vudu, Fandango Now 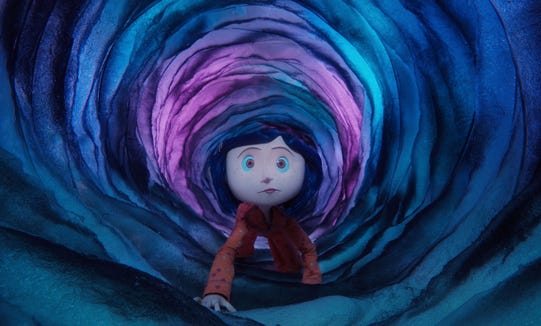 A curious girl (voiced by Dakota Fanning) travels through a portal between worlds in “Coraline.”(Photo: FOCUS FEATURES)

The most tech-savvy kid in a group of young misfits is a walking, talking Rube Goldberg machine so there’s a timeless quality to the epic adventure with children trying to save their homes and town. It also doles out lessons on cool pirates, young love and tolerance.

Amid the catchy songs and top-notch dancing, there’s a strong civil-rights message – as well as John Travolta in drag – at the heart of the 1960s-set musical. The deeper themes are there if you’re looking, but it gives your kids some old-school dance moves to learn.

Where to watch: Netflix, iTunes, Vudu

If your children are interested in trying out scary movies, this 1950s-set throwback supernatural tale is a good foray into horror centering on an orphaned boy who goes to live with his eccentric uncle in his super-weird magical house and has to deal with a resurrected warlock.

While “Lord of the Rings” might be your initial fantasy go-to, this is a more family-friendly trilogy to tackle, beginning with the animated movie that first introduced a Viking teenage boy with identity issues and the story of how he met his scaly best friend Toothless.

Hiccup (voiced by Jay Baruchel) and buddy Toothless fly high in “How to Train Your Dragon.”(Photo: DREAMWORKS ANIMATION)

Of all the flicks featuring the fedora-clad hero, this one is both great in quality and OK for most kids: Young teen Indy has his first adventure, old Indy meets up with his dad plus punches Nazis and seeks a religious antique, and most importantly, no melting faces or ripped-out hearts!

The Pixar movie that promises all the feels – in fact, emotions running around a little girl’s head are central to this hilarious and surprisingly deep animated comedy. The little ones can appreciate effervescent Joy and blistering Anger, while everyone else can relate to the inner turmoil of growing up.

You love to hate and just love to love David Bowie as the smoothest Goblin King of all time. He’s the main attraction, obviously, of Jim Henson’s retro fantasy, though the tale of a teenage girl who first wishes her baby bro away (and then needs to save the kid) is stunning overall in look and scale.

The Lego films are pretty awesome across the board, yet this one is special. Little children love Batman, and the animated movie sends up his dark and macho persona from more adult movies by putting the Caped Crusader through his nightmare: actually needing a family. 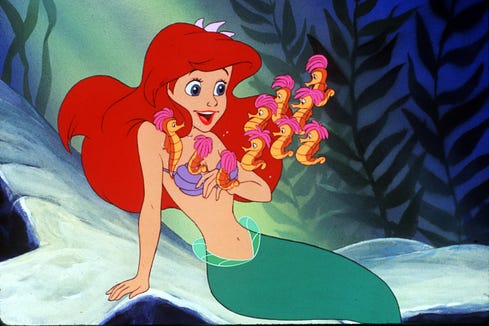 Ariel (voiced by Jodi Benson) sings about venturing to the surface world in “The Little Mermaid.”(Photo: WALT DISNEY PICTURES)

The greatest hit of Disney’s ’80s/’90s run of A-list musicals, “Little Mermaid” has the best songs, crooning crustaceans, a love story, a seriously evil villainess with no redeeming qualities and a narrative about being free. And it’s totally OK if you’re feeling the lyric “I want to be where the people are” more than usual.

Where to watch: Disney+, iTunes, Vudu

Sailing on the high seas for an epic musical is a great escape from all the social distancing. Moana’s an empowered Disney non-princess who’s a delight, self-obsessed demi-god Maui (Dwayne Johnson in one of his greatest roles) is a hoot, and there’s even a villainous hermit crab.

Kermit, Miss Piggy, Fozzy and the gang have recently wrestled with relevance, especially among younger audiences. Unleash this tuneful, retro road-trippin’ ode to showbiz and you’ll remind the whole clan why the Muppets ruled pop culture back in the day. Electric Mayhem forever!

Where to watch: Disney+, iTunes, Vudu

Kids, don’t steal the Declaration of Independence. But it’s OK if Nicolas Cage does it in this all-ages adventure about a historian on heck of a treasure hunt. Parents are familiar with Cage’s crazy shenanigans so youngsters will get a full load of him plus some history lessons. 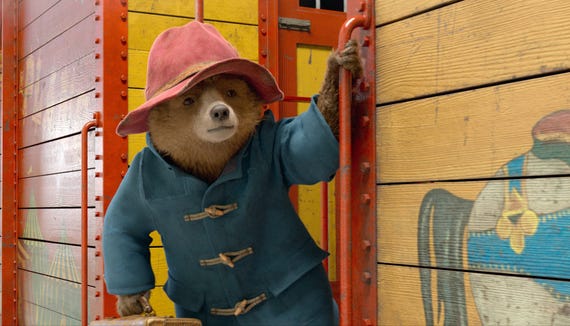 The beloved Peruvian bear (voiced by Ben Whishaw) goes on a new adventure in London in “Paddington 2.”(Photo: WARNER BROS.)

The criminally cute bear from the old children’s books came to vivid life in the first “Paddington” but is just excellent in the quirky sequel, where our furry Peruvian hero is framed for the theft of a valuable pop-up book, gets incarcerated and tussles with a villainous washed-up stage actor (Hugh Grant).

Leaving this classic off the list would be inconceivable! Having to stay at home is pretty much a theme with this, as a little boy’s sick at home and he – plus the audience – gets read the great love story of Westley and Buttercup with a supporting cast unlike any other.

Where to watch:  iTunes, Vudu, Amazon

Imagine Indiana Jones as an Avenger. Before Captain America hit the big screen, Disney launched one heck of a World War II-era superhero with the two-fisted title dude, and his super-sweet jetpack, who has to deal with romantic issues, learning on the good-guy job and Nazi machinations. 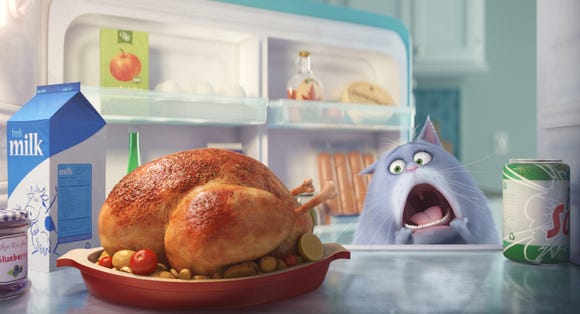 Chloe the cat (voiced by Lake Bell) yearns to have a morsel of turkey in ‘The Secret Life of Pets.’(Photo: UNIVERSAL PICTURES)

Worth it just to watch Kevin Hart voice a high-strung rabbit. “Pets” takes a relatable concept that everybody can wrap their heads around – what do our animals do when we’re not around? – and goes to town with hilarity and heart. Now you and your dogs/cats/hamsters can watch together!

There’s a Spider-person for everybody in this simply fantastic superhero flick centering on young black/hispanic teen Miles Morales, who gets familiar spider powers and learns great responsibility from original Spidey Peter Parker and a group of Spider-Men (and girls) from other worlds.

Much more clever and entertaining than the title suggests, this action-adventure about a couple of siblings who have to save their ex-secret-agent parents (including Antonio Banderas as the world’s raddest spy dad) – and, naturally, the world – from the clutches of an antagonistic TV-show host manages to satisfy across the board.

The Disney Channel has rolled out some interesting stuff for tweens and teens – “High School Musical,” “The Descendants” – but this is one seriously jam for the oldsters, too, with a story featuring two kids stuck in an old-school surf movie crossing “Back to the Future,” “Grease” and “West Side Story.”

Where to watch:Disney+, iTunes, Amazon 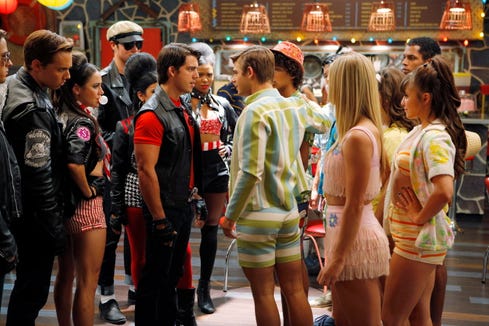 The bikers and surfers tussle in a turf war in “Teen Beach Movie.”(Photo: FRANCISCO ROMAN/DISNEY CHANNEL)

Like the old movies where Abbott and Costello meet Universal monsters, this claymation comedy sends up classic horror movies in gut-busting fashion. Cheese-adoring oddball Wallace and his dog Gromit are an English staple, and this romp pits them against a gigantic bunny eating up a town’s prize veggies.

Johnny Depp is no Gene Wilder, and the original adaptation of the Roald Dahl book is way better than the Tim Burton remake. Wilder’s chocolatier takes a shine to young Charlie with the golden ticket, but there’s a hint of darkness there with all that whimsy to make this a complex fable.

Who doesn’t have a spirit animal (or tin man) among Dorothy’s Yellow Brick Road posse? More than 80 years later, it’s still a magical sight to see black-and-white Kansas turn to technicolor Oz, and the escapist nature (and need to return home) plays as well now as it ever did.