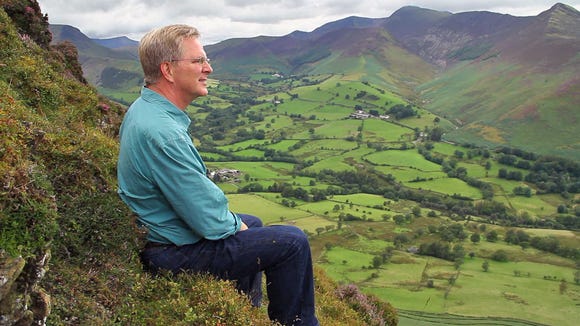 
— Recommendations are independently chosen by Reviewed’s editors. Purchases you make through our links may earn us a commission.

With health organizations the world over recommending we all stay inside to avoid worsening (and prolonging) the effects of the coronavirus, cabin fever has naturally begun to set in for many of us. And while there are plenty of ways to break up the boredom, from video chatting to board games and puzzles, the itch to get out and see the world is a tough one to scratch.

Luckily, as long as you’ve got steady internet service, there are near-limitless ways to venture vicariously with the help of travel shows, movies, and other programming that travel across the globe (and beyond). Below is a list of some of our favorite titles that bring the world to your doorstep, letting your mind go exploring while your body stays safe and sound at home.

Need help finding products? Sign up for our weekly deals newsletter. It’s free and you can unsubscribe any time.

The intrepid explorer best known for his PBS series is more than just a world-renowned travel guide. Steves is an absolute master at unlocking the hidden gems of the world’s greatest cities, towns, and monuments—and his specialty is introducing American audiences to European hideaways like Italy’s Cinque Terra region. Hulu currently has 103 episodes available to stream, chronicling locations from Santorini to Scotland. From golden Parisian sunsets to sun-drenched Mediterranean beaches—and the food, good god the food—let Steves and his crew usher you across the old countries in style.

2. The World’s Most Extraordinary Homes

Starring the lovely pairing of award-winning architect (and deep thinker) Piers Taylor and British actress/property developer Caroline Quentin, this grandiose BBC Two series takes you across the globe to explore some of the most awe-inspiring homes ever created. Whether it’s a retro retreat nestled in the Swiss Alps or a modern marvel built out of a 747 airplane wing, this series is more than just a sneak peek into the homes of the wealthy; it’s a celebration of living, experienced through its exuberant hosts, one awe-striking location at a time.

Stream The World’s Most Extraordinary Homes on Netflix

Scouring the earth for the perfect house can be a fantastic adventure—especially when it’s not your money (or your jet lag). The spinoff of the incredibly popular HGTV series, the international version opens the borders like only great reality TV can. Follow our frustrated, picky buyers as they relocate to new and exotic lands, from Australia to Ecuador. By each episode’s conclusion, you’ll never be so glad to be home.

More: 100 TV shows that will keep you streaming for weeks of social distancing

These two beloved series break the cooking-show mold, offering as much travel and philosophy as they do four-star cuisine. Bourdain seems to have a confidant in every city, a favorite dive in every port, and the bonds he makes over food and liquor along the way feel as real as anything on TV. While the world-class chef departed this earth far too early, he left behind a life-affirming legacy that’s well worth savoring in these times of confinement and reflection.

Stream No Reservations and Parts Unknown on Hulu

It can be easy to overlook National Geographic programming on Disney+ next to all the princesses, superheroes, and animated wonders. But the streaming service’s National Geographic programming can be a fantastic escape, especially in times when the world feels small. Following award-winning technologist and explorer Albert Lin, this six-part series explores some of the world’s most intriguing sites, uses science and technology to peer behind the myths and legends.

6. How the Universe Works

Why confine yourself to traveling the globe when there’s a whole wide universe out there? Using modern CGI, “How the Universe Works” offers a fascinating look inside the grand machinations of deep space, and beyond. Dive into spectacular neutron stars, peek into the depths of black holes, and explore the universe’s greatest mysteries, all from the comfort of your couch.

Stream How the Universe Works on Hulu

Some people may enjoy a story to go along with their virtual trip. If you’ve ever said “see America first,” this classic comedy starring Chevy Chase and Beverly D’Angelo is worth revisiting for the sights alone, nevermind the hilarious blunders. Follow the bumbling Griswold family on their “quest” across the U.S. to see Marty Moose, while soaking up the scenery and hijinks along the way. There’s a reason this film started a franchise, and with all due respect to “Christmas Vacation,” it’s the best of the lot. Tired of the original? “European Vacation” is also on Hulu, and it’s both raunchier and funnier than you probably remember.

There’s nothing quite like a staycation—especially if you happen to have a first-class tour of one of the nation’s best cities. While Ferris Bueller (Matthew Broderick) may not be a world traveler, he knows how to do a town like Chicago in style. See the city’s best sights, courtesy of Ferris and friends, while allowing their hilarious capers to melt away those coronavirus worries. In Ferris we trust.

Of course, we all want to roam the Indian countryside by train with three drug-addled brothers, but until now, who had the time? Equal parts comedy and drama, “Darjeeling” follows three squabbling siblings (Owen Wilson, Jason Schwartzman, and Adrien Brody) in an attempt to reconnect as they travel India’s backroads. Wes Anderson’s masterpiece of unique storytelling and gorgeous cinematography is a sometimes silly, sometimes deep journey of spirit, body, and mind.

And now for something completely different. You can’t head to a theme park right now, but this high-definition, POV video series is the next best thing. Virtually ride some of the country’s best roller coasters, courtesy of the folks at roller coaster mecca Cedar Point in Sandusky, Ohio. Simply dial this YouTube channel up on your big screen, crank up the sound, and let her rip. (Hint: Let YouTube roll to find plenty more POV roller coaster videos as well.)

Prices were accurate at the time this article was published but may change over time.